In October last year we reported that DPC had applied for planning
permission to establish a community car park on the land previously owned by Greene King and known as the Plough Car Park. The October 2017 report is still available on the Datchworth web site (www.datchworth.com) and this short update will be added to the information given there at that time.

The further updates are that –

There are a number of actions in hand before work can start on realising the approved plan. These include agreeing a lease with the owners of the Plough and Datchworth Coffee for their part of the car park land, discharging the planning permission conditions and preparing working drawings for building regulation approval and documentation to seek tenders for the work.

In the mean time, to assist the Plough and the new “Datchworth Coffee” it has been agreed that the wire fence will be removed to allow parking to the extent that it existed before Greene King sold the land in two lots.

Much achieved but still much to do – we will continue to keep you posted.

The Parish Council has applied for planning permission to develop the whole of the old Plough car park site as a community car park for 21 cars, with a garage for two cars and retained garden at the rear. Parking for up to 8 bicycles is also being provided. A plan of what is proposed is included with this article. The East Herts planning reference is 3/17/2317/FUL. You can access full details via the Planning Section of the East Herts web site. A clickable link to this is provided HERE.

Although planning permission for the erection of a new dwelling was granted in September 2015 the Parish Council’s view continued to be that the whole site should remain as car parking in order to reduce on-street parking, congestion and risks to both traffic and pedestrians around the cross roads. The owners of The Plough and Datchworth Coffee support this view. The parking layout for 11 cars for the pub for which Greene King were given planning permission doesn’t provide easily accessible spaces and was likely to discourage potential users, thus increase on-street parking near the cross roads. It would have been deep and narrow, and the risk of unsavoury use was a real concern.

The west part with its planning consent was sold to a potential developer who has now agreed to sell it to the Parish Council for village parking. The owners of The Plough and Datchworth Coffee have in turn agreed to lease their part of the site to the Parish Council to enable it to provide a community car park for the village on the combined site. Parking will be regulated to ensure that 11 spaces are available for users of The Plough pub and Datchworth Coffee during their opening hours.

The garage that will be located on the site is being provided as lifetime parking for the benefactor. Its use will eventually revert to the Parish Council. Storage of fete equipment and the like is an obvious future use when ownership eventually reverts.

Although it is difficult to predict, it is anticipated that the community car park will be used in the following ways:

The car park will be locked at night, although leaving a car will be allowed if it is better to walk (or taxi) than drive!! But habitual over night parking will not be permitted.

The grant of planning permission is necessary before we can move on to the next stages – we will keep you posted. 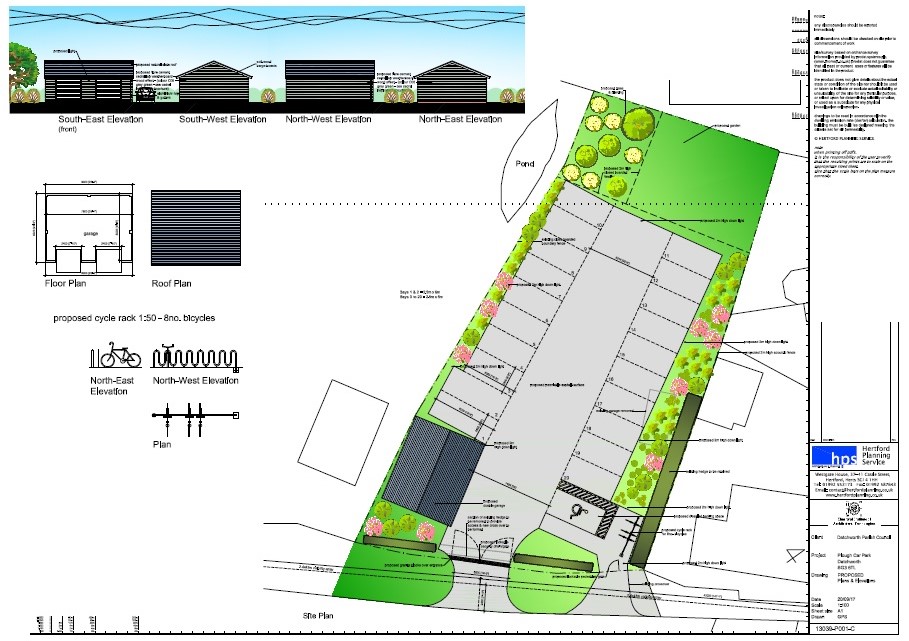 The Clerk can be contacted as follows:-

*Please note this is a postal address ONLY

For all finance enquiries, please email:

Meetings normally take place on the last Tuesday of the month (excluding August & December) and are held in the Church Hall, Datchworth at 7pm. We are attempting to keep the public safe by maintaining social distancing, so if you would like to attend please advise our Clerk.

This site uses cookies. By continuing to browse the site, you are agreeing to our use of cookies.

We may request cookies to be set on your device. We use cookies to let us know when you visit our websites, how you interact with us, to enrich your user experience, and to customize your relationship with our website.

Click on the different category headings to find out more. You can also change some of your preferences. Note that blocking some types of cookies may impact your experience on our websites and the services we are able to offer.

These cookies are strictly necessary to provide you with services available through our website and to use some of its features.

Because these cookies are strictly necessary to deliver the website, you cannot refuse them without impacting how our site functions. You can block or delete them by changing your browser settings and force blocking all cookies on this website.

These cookies collect information that is used either in aggregate form to help us understand how our website is being used or how effective our marketing campaigns are, or to help us customize our website and application for you in order to enhance your experience.

If you do not want that we track your visist to our site you can disable tracking in your browser here:

We also use different external services like Google Webfonts, Google Maps and external Video providers. Since these providers may collect personal data like your IP address we allow you to block them here. Please be aware that this might heavily reduce the functionality and appearance of our site. Changes will take effect once you reload the page.